Conscious nutrition: the foods you eat are basic/processed foods (not foodstuff) which, in addition to their nutritious nature, promote the functioning of certain bodily functions, improve our quality of life, and strengthen the body's defense mechanism.

For your own sake, distinguish between food and foodstuff.

Mi vagyunk / Who we are 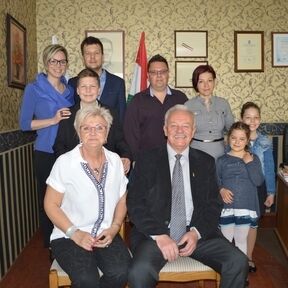 Our family business has started in 1982, it was built up on the foundations of the small-scale industrial activities, and it is 100% owned by the family. Over time, with the expansion of our activities, we have gone through several transformations. (Aqua-Plastech Kft. 1996, D-Produkt Kft. 2017)

Thanks to the constant innovation of the family and the company, our products and services have now gained such recognition that it reaches not only within the domestic ranks, but also across national borders. We have established traditions in many other countries for the sparkling water, which is a Hungaricum.

Currently, production and storage takes place at our Hajdúsámson site in a 4,500 square meter covered area in a 2 ha park. Several design protection registrations are registered under our name in the Patent Office.

The recognized, 11,000-year-old health-friendly BIO mineral water from our well (210m) (Hungary's first BIO certified mineral water) forms the basis of all water-based products. Due to the will of fate and an idea, we have developed a self-designed electric water treatment/structuring device which can restructure the BIO water of our well. As a result of the electrical treatment, various structural transformations take place in the water, so in the last 24 years, numerous experimental examples and human clinical studies confirm their positive impact on the quality of life.

Numerous characteristics of our structured drinks-waters have come onto the spotlight, which were previously unknown in the world of waters. These findings gave us the push, which made us to not spare money, time and energy in order to develop our end products to the maximum level and this way be able to help many and improve the quality of their life.

You will find our location next to highway 471 before Hajdúsámson. Big blue and white buildings with Nanna's heart and soda picture on the side. You can't miss it!

Keress minket / Look for us